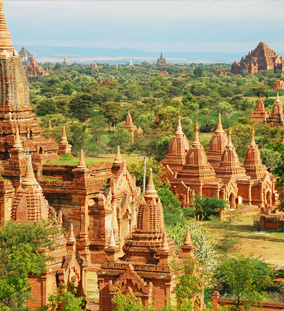 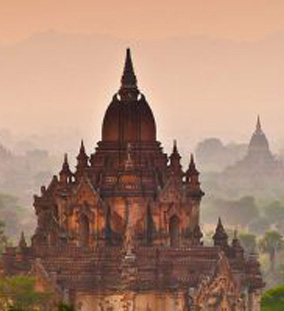 Situated on the eastern bank of the Ayeyarwady River in central Myanmar, the ancient Myanmar capital of Bagan has been described as a place of "exquisite ruins." Two thousand pagodas, large and small, occupy 16 square miles (41.1 square km) of scrubland. Only two other archaeological sites in the Southeast Asia - Cambodia's Angkor Wat and Indonesia's Borobodur - rival the architectural magnificence and beauty of Bagan.

A Brief History Of Bagan

Founded in about A.D. 849, Bagan, which is the major attraction of Myanmar travel, served as the first Myanmar royal capital from 1044 until 1287. It was a center of Theravada Buddhism, the religion practiced in Myanmar and promoted by King Anawrahta in the eleventh century. The art and architecture of Bagan owed much to the Mon. Anawrahta brought some 30,000 Mon monks, artisans, and scholars to Bagan as part of his war booty from the conquest of the Mon. At the height of the empire in the eleventh century, about five thousand temples stood in Bagan, their architectural styles ranging from early Indian and Mon to later, typically Myanmar styles.

The period of Bagan glory is now also considered the golden age of Myanmar arts. Although, the Myanmar constructed other buildings, such as teakwood palaces, monasteries, and libraries, only Bagan's breathtaking pagodas remain standing today. The Shwezigon Pagoda, built by King Anawrahta, ranks with the Shwedagon in Yangon and Phaung Daw U in Inle Lake as one of the most important shrines in Myanmar. The cross-shaped, 170-foot (52-m) Ananda Temple houses four 30-foot (9m) standing Buddha statues. At 190 feet (58m), the Thatbyinnyu holds the distinction of being the highest temple in Bagan.

In 1287, Bagan was sacked by the invading armies of Kublai Khan from China. An earthquake on July 8, 1957, further destroyed many of the temples. A few have since been restored, but some landmark structures, such as the 900-year-old Buphaya Pagoda, were lost forever.

Today, in the small communities around Bagan and in the neighboring village of Nyaung U, people make their living by fishing, weaving, and producing lacquerware.

Ananda Temple, built by Bagan'sprolific temple-builder, King Kyansittha, in 1091.
Thatbyinnyu Temple, dating from 1144; beautiful temple with views over the plain (most popular sunset spot).
Bagan Musuem, Buddha images and treasures from Bagan's stupas and temples.
Gawdawpalin Temple, upper terraces are a good spot to watch the sunset over the Ayeyarwady.
Upali Thein, despite some deterioration, beautiful interior painting.
Shwezigon Pagoda, with its golden stupa, is Bagan's biggest and most important temple.
Mingalazedi, built 3 years before the Mongul invasion; beautifully proportioned, with gentle flowing lines.
Nanphaya, for beautiful stone carving on interior pillars.
Dhammayangyi Temple, one of the most imposing buildings on the plain, known for its fine brickwork.
Sulamani Temple, a fine example of Bagan's Late Period.
Best views at sunset: Shwesandaw, Gawdawpalin, Pyathatgyi.