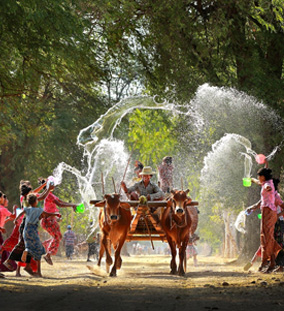 Living in one of the Nature's most favored lands, the Myanmar are lively and enjoyable people. With agriculture as their main occupation they make an easy livelihood as their natural environment. Inhabiting in various parts of their country, which is endowed with natural assets of forests, streams, lakes, mountains, hills, and sea coast, Myanmar lifestyles are amphibious in character which is reflected in their cultural activities. Every month of the Myanmar lunar calendar has its own season, its own flower, its own zodiacal sign, its own constellation and its own seasonal festivals. Classical poets have composed verses on twelve seasons describing the natural beauty of each season, its seasonal flower, its seasonal zodiacal sign, that appears in the sky in this season, and the festival which is held.

The origin of the Myanmar calendar is not clear. But it was revised several times by different kings. It consists of 12 lunar months; 1361-1362 was equivalent to the Gregorian year 2000. The difference between the lunar year and solar year is made up for by the addition of an extra month to the lunar calendar every few years. The Myanmar year begins in mid-April and ends in mid-March. Both the Myanmar and Gregorian calendar are widely used.