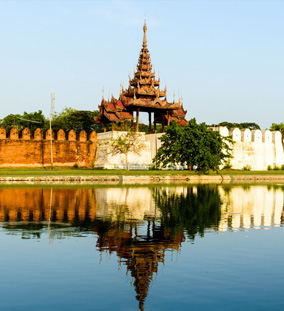 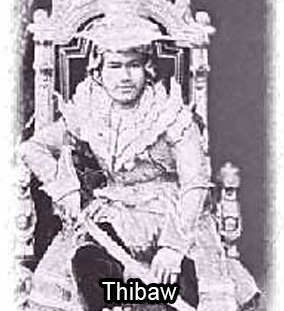 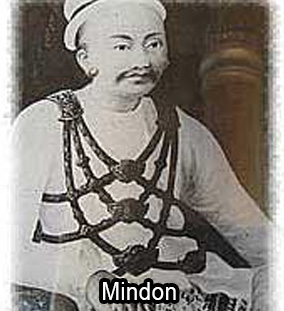 'By the old Moulmein Pagoda lookin'
eastwards to the sea,
There's a Burma girl a-settin'
and I know she thinks of me."
[From "Mandalay" by Rudyard Kipling (1865-1936), the poem that gave the world its first inkling of the exotic city]

The resonant name of Mandalay - Myanmar, reaches out far beyond the country's borders, with all the associations of its rich and exotic past. This royal city, regarded as the heart of Myanmar culture, is not very old. It is in fact quite young, having been built in the same year that Macy's department store first opened its doors to customers in downtown Manhattan in 1857. The original name of the city was Yadanabon Naypyidaw. But the people simply called it Mandalay as it lies near Mandalay Hill. The name may have derived from Pali word "Mandala".

Mindon justified his decision to move the city from Amarapura to Mandalay on a prophecy by the Lord Buddha, who told his disciple Ananda on Mandalay Hill that on the 2,400th jubilee of Buddhism a great metropolis would be built at the foot of the hill. Some historians, however, noted the shift might have been to stay out of reach from most feared Congreve British rockets, which proved so fatal that Maha Bandoola was killed in the Danubyu fortress; Amarapura was too close to the Ayeyarwady River, and the British naval ships could have come very quickly along the river rather than inland route. The Ayeyarwady River was the usual route of British offensive throughout all three wars. Adolph Bastian, a German traveler, wrote in his 19th-century memoir, A Journey to Burma (1861-1862), that King Mindon resettled in Mandalay because he had seen British envoys coming upriver by steamboat to his capital in Amarapura and recognized that he would be in easy range of British artillery.

A deeply religious Mindon was a reformer, and under his rule the city enjoyed a cultural and economic golden age. Sadly, though, the era of the mighty Konbaung kings ended soon after his death, when his successor King Thibaw was forced to cede Mandalay to the British colonialists in 1885. Together with his notorious wife Supayalat and their children, the last king of Myanmar was exiled to India, where he died in 1916.

Having been the capital of the last two Myanmar kings who were staunch defenders of Buddhism, Mandalay has deservingly been the religious and cultural center of the country to this day, and one of the main attractions of Myanmar travel. Famous pagodas such as the Mahamuni, the Thakkya Thida, the Shwe Kyee Myint, Eindawya, Kuthodaw and Kyauktawgyi lie scattered all over the city, each with its own interesting history and unique features. Mandalay can rightfully claim to be the center of Buddhism in the whole wide world with scores of great monasteries, each one functioning like a university of Buddhist studies, and with the largest number of monks to be found in one single place in the world. One's pursuit of Buddhist studies is considered incomplete until and unless he has studied in Mandalay.

The generous and charitable nature of Mandalayans can be seen from the fact that tens of thousands of monks residing in grand monasteries - with all their requirements supplied by the citizenry. The monks receive fabulous offerings especially at Kahtein-Yellow-Robe offering ceremonies. A long procession of monks doing their alms-receiving-rounds in the mornings is a common sight in Mandalay.

A lot of Myanmar arts and crafts such as sculpting images of the Buddha, making very thin gold foils to be applied to the images and pagodas and hand-loom-weaving of silk textiles are still centered in Mandalay. The weavers are still weaving the patterns that were once worn by the courtiers in the royal palace. Mandalay had also produced great dancers, song-writes, singers, writers and traditional musicians. The city can boast of the Institute of Indigenous Medicine, the only one of its kind in the whole country.

The climate of Mandalay is a different story. The city used to be notorious for its intense heat. However, things have changed for the better now. After several tree planting campaigns, the city is getting greener and cooler. The resurfacing of the roads and streets with asphalt has controlled dustiness to a certain extent.

Inspite of rapid influx newcomers from border regions, to visit Mandalay is to touch the heart of Myanmar and to experience its quintessence.

Mandalay is a great location to travel the surrounding tourist attractions; the former royal captitals, Pinya, Innwa (Ava), Sagaing and Amarapura. And there is Pyin Oo Lwin, formerly known as Maymyo, just 43 miles away by road. Standing on a plateau about 3,500 feet above sea level that well-known hill station is famous for its fine climate and the beautiful scenery around it. There are water falls and caves in its vicinity. The uphill drive across the forest dotted with breath-taking scenic spots is highly refreshing.

The most famous of all the religious places in Mandalay is Mahamuni. It is not a pagoda but an image of the Lord Buddha, believed to have been cast in the Lord's lifetime in the very presence of the Lord according to the tradition.

Read more about Mahamuni The chief attraction of Mandalay to visitors is Mandalay Hill, probably owing to its mystical religious background. The 954 feet-high hill is a hallowed complex indeed as it is covered with pagodas, images of the Buddha and some other aspects of Buddhism.

Read more about Mandalay Hill As Mandalay was the last seat of Myanmar royalty, many things in Mandalay is usually associated with the palace. During a century or so under the British rule, the chief symbols of sovereign, independent Myanmar were the royal palace, the moat and the walls around it - the pride and glory of Mandalay as well as the whole country.

Read more about Mandalay Palace At the foot of Mandalay hill lies the Kuthodaw pagoda, completed in 1868. King Mindon employed two hundred craftsmen for seven and a half years to carve out the whole Pali Canon in 729 marble slabs - the largest book in the world. Each of these slabs has its own whitewashed stupa, and the main stupa is modelled on the Shwezigon pagoda in Bagan. In 1871 King Mindon convened the Fifth Buddhist Synod in order to consolidate the faith and the unity of Myanmar Buddhists. For six months, a team of 2,400 monks recited the complete text of the Tipitaka.

Probably the best time to go to Mandalay is during Thingyan, the Water Festival. Many people agree that Yangon cannot rival Mandalay's Thingyan. During the festival, Mandalay maidens go round the city or at water-playing marquees while the air is filled with music probably by the renowned Myoma (city proper) Musical Troupe, which is a trademark institution of Mandalay. Atumashi, meaning "incomparable", was built in 1857 by King Mindon. The original Atumashi was a magnificent wooden structure with considerable exterior stucco and set on a high platform reached by a formal ceremonial staircase. It was considered one of Southeast Asia's most magnificent buildings. Atumashi Monastery has been rebuilt as a faithful replica of the original destroyed by a fire. But it doesn't come down to the original bearty and grandiose. When the British annexed the city and Upper Burma in 1885, the large diamond vanished, perhaps taken by the British or other marauders. The Atumashi Kyaung is near the Kuthodaw Pagoda, built at the same time, and next door to the Shwenandaw.

The Shwenandaw monastery is the most significant of Mandalay's historic buildings, since this 'Golden Palace Monastery' remains the sole major survivor of the former wooden Royal Palace built by King Mindon in the mid-nineteenth century. It is a wonderfully fragile yet grand example of 19th century Burmese teak architecture and also a significant masterpiece of the wood-carver's art.