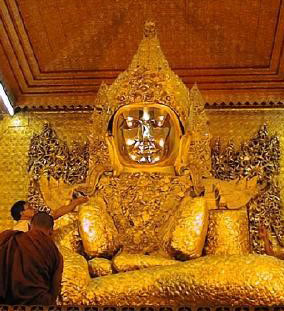 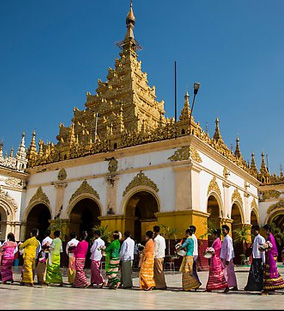 The most famous of all the religious places in Mandalay is Mahamuni. It is not a pagoda but an image of the Lord Buddha, believed to have been cast in the Lord's lifetime in the very presence of the Lord according to the tradition. Over the years pilgrims have covered it with gold leaf, so that some parts of the body are now barely recognizable.

In places the layer of gold on this ancient statue is several centimeters thick and it must weigh several hundred kilograms. It is also known as the RakhineImage as it was brought to Mandalay during the reign of King Bodawpaya. It is a great favorite of the Buddhist hill tribes of Myanmar. The tribal members in their distinctive costumes can be seen paying their repects to it most of the time.

Every morning at 4 AM, a ceremony is held during which monks wash the face of the most venerated statue in Myanmar and even brush its teeth. Also worth seeing are six bronze Khmer figures, which some 800 years old and were originally enshrined at Angkor Wat (Cambodia). Three of these figures are lions and two are temple guards (dvrapala) who, according to folklore, can cure the ills of the faithful if centain parts of their bodies are rubbed. The best preserved of these statues, however, is a three-headed elephant, the mount of the Hindu god Indra.