Surrounded by mountains, villages, and several monasteries, picturesque Inle Lake measures about 10 miles (16km) in length and about 4 miles (6.4km) across.

An estimated 100,000 Intha (Angsa) people live on and around the lake. In their own language the word Intha means "Sons of the Lake", and their way of life is certainly well adapted to this environment. - they live on their fishing and the produce of their floating gardens. In narrow boats they set out across the water before sunrise, standing with one leg on the stern and using the other leg to row, so that they always have a hand free to scoop fish from the bottom of the lake into their large bamboo nets. This unique way of rowing has make them famous. The Intha have also developed a singular form of aquaculture: a network of interwoven seaweed and hyacinths creates a thick layer of humus over the years, and this is attached to the bottom of the lake with bamboo poles, and then planted with tomatoes, cauliflower, aubergines and flowers. 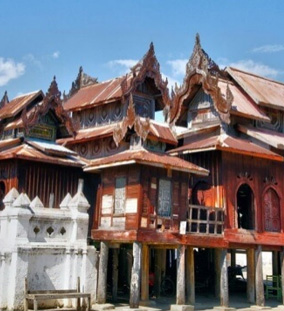 The tourist center for those who want to enjoy this wonderful setting is Nyaung Shwe (also known as Yawnghwe). Just 5 kilometers north of Inle Lake on the Nan Chaung Canal is the former residence of the last sawbwa or saopha (local chief) of Nyaung Shwe and the first president of the Union of Myanmar, Sao Shwe Thaik. The palace he and his family lived for many years in now a museum. The palace itself has retained little of the grace and charm of former times, when princes and princesses would walk across its creaking teak floors. The walls are decorated with dark wooden carvings, and the royal couple's throne still stands in the reception hall. Near the palace, a little way outside the town, is the Nyaung Shwe monastery, which is made of teak and incorporates a temple that was built by a Shan sawbwa. The monastery is a regular stopping place for tourist buses, because the young monks standing in the large oval windows are popular with photographers. The largest village on Inle Lake is Ywama. Each of its two-story houses has its own landing dock, and boats are kept at the lake level. Every five days, a "floating market" brings buyers and sellers together in small boats on the lake. The markets sell a wide variety of fresh fruits, vegetables, flowers, and tobacco. The produce is grown on "islands" made from dredged-up water plants covered with fertile mud and anchored by bamboo stakes to the bottom of the lake. Inle Lake also supports several cottage industries, including weaving, silversmithing, and cheroot (a large, dark cigar with open, untapered ends) rolling. Another attraction, a must for every Inle visitors, is Nga Hpe Chaung monastery (jumping cat monastery). Situated on the western shores of the lake, the monastery has indeed become a kind of refuge for cats. The monks take tender loving care of their four-legged friends, and much to the enjoyment of the spectators the cats performe tricks: for a piece of food they jump through rings which the monks hold up high. Cats do not jump anymore (updated).

At the southern end of the lake is the Phaung Daw Oo Pagoda. There are five statues fo Buddha here, each covered with layer upon layer of gold leaf which has been stuck on as a token of veneration, and so thick is this gilding that the statues are more like balls of gold than images of Buddha. A highlight on Inle Lake is the full moon festival of Thadingyut, usually occurred in October, which celebrates the Buddha's return from Tarwateintha (Abode of Nats) and attracts thousands of people from all over the country. Dragon boats race across the lake, and the Buddha statues are carried in solemn procession on a golden barqe from one village to the next in order to drive away evil spirits. 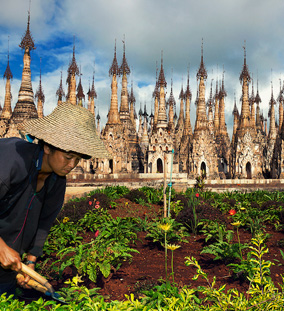 West of Phaung Daw Oo pagoda, on the arm of a river some distance away from the lake, is the ancient Indein temple complex. The site features over a thousand 17th century stupas, many decorated with fine figures, although some are in an advanced state of decay. Lizards rest in the shade of these weather-beaten, overgrown structures, only adding to the exotic air of the picturesque site.